Gateway to the Etosha National Park

Outjo is the district town of the Kunene Region and counts about 7,000 inhabitants. The name is derived from Otjiherero and means „small hill“. The town was founded in 1897 by the German colonial troops. Before it became a settlement the place served as military base to explore the then unknown north of German South West Africa.

Touristic highlights are scarce in Outjo. The main importance of the town lies in supplying the surrounding farms and also in its vicinity to the Etosha National Park. It sometimes serves as stopp over for one night for people on their way to the park.

Worth mentioning is the bakery in Outjo, well known for its wide selection of cakes and popular for lunch breaks. 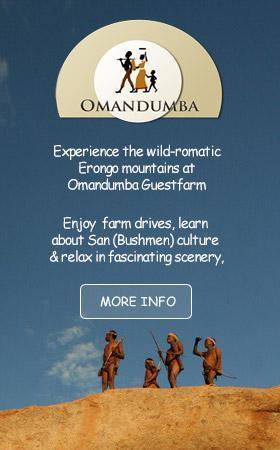