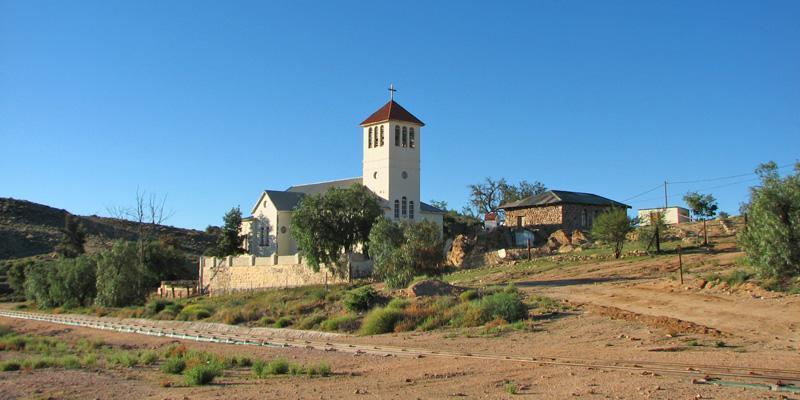 Railway town in the south of Namibia

The region around the little village of Aus and the Huib Plateau was originally inhabited by nomadic hunter-gatherer groups of the Nama. They already gave the town its present name. !Aus means snake fountain and it was the last reliable fountain before the start of the 120 km wide waterless Namib. Until the year 1882 the region remained spared from European influence, only a few missionaries visited the snake fountain.

The development of Aus as a small trading post began around 1883, when the harbour of Angra Pequena, discovered in 1447 by Bartholomeu Diaz, became more and more important for the German Reich under Adolf Lüderitz. Aus connected the inland around Keetmanshoop with Lüderitz. In 1890 the Germans officially declared Namibia as so called Crown Colony and the harbour town of Lüderitz developed into an important trading post for German South West Africa. From here more and more soldiers of the German “Schutztruppe” arrived in the country, followed by armed disputes between the German army and the indigenous inhabitants of Namibia.

At the end of 1904 the war between the Nama and the Germans erupted and more German soldiers had to be brought into the country for the “protection of the peoples”. For this reason the construction of a railway connection between Lüderitz and Aus was authorized by the German government. Until today the construction work is praised – within one year the complete distance of 120 km was completed. The fact that more than 1000 “local railway workers” died during this construction is however forgotten every now and then.

Anyhow the railway station of Aus developed into a small town with a hotel, cafés, police station, church and some shops and enterprises in the years to follow. As from 1907 the valuable Karakul sheep were bred all around Aus. When in 1908 the first diamond was discovered near Kolmanskop close to Lüderitz, the development of Aus accelerated even more. Even a German school was built in the years to follow.

With the start of World War One the German time in Aus came to an end. The German Schutztruppe and the police were interned and this prisoner of war camp can still be visited today. South West Africa came under South African governance. Lüderitz lost its importance, as the harbour in Walvis Bay was developed and the railway line from South Africa brought many of the needed products into the country. Hence Aus also lost its importance.

During the 1950s however another boom occurred from the Karakul sheep industry, the international market was supplied, amongst others, by the Karakul breeders around Aus. However the little town of Aus suffered a heavy blow in the 1980s when the Karakul industry collapsed. At the same time the main diamond industry was moved from Kolmanskop further south to Oranjemund and long periods of drought hit the area. Consequently many people left Aus, shops and schools closed down.

Since tourism has developed a liking for Aus the little town is slowly recovering. The feral horses of the Namib and the beautiful accommodation opportunities as well as its strategically favourable position between Lüderitz and the inland attract visitors to Aus.

In winter guests should however pull up their socks – Aus is known to be one of the coldest towns in Namibia!