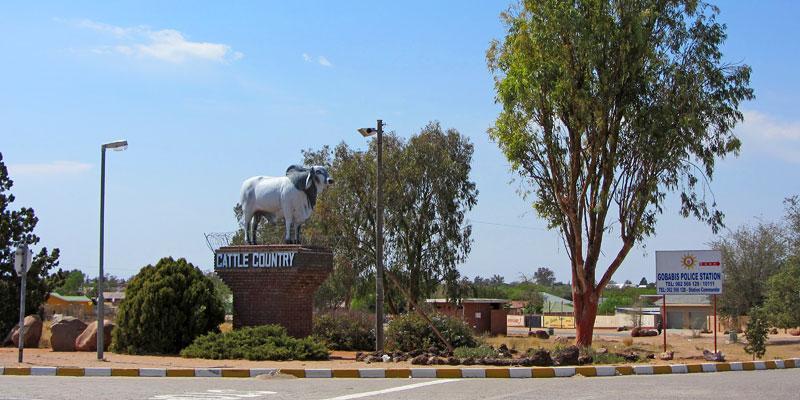 The heart of Cattle Country

Gobabis is situated about 200 km east of Windhoek on the B6 and has about 15,000 inhabitants. The town supplies nearly 500 farms in the surrounding area, which mainly practice cattle breeding and are often run by farmers of German origin. Gobabis is the centre of the Omaheke Region, situated at the edge of the Kalahari and covering an area of more than 80,000km².

The history of the town starts around 1840, when a group of immigrated Orlam (general term used for the generations originating from partnerships between the Dutch Boers and Nama women in the Cape Colony during the 17th/18th century) from the Cape Province under the leadership of captain Amraal Lambert settled here. Amraal Lambert also gave the town its name: because of the abundance of elephants the town was called Goabes (home of elephants in Nama).

In 1845 the first mission station was founded, which was taken over by the Rhenish Mission Society in 1856. Due to the good leadership of Amraal Lambert and the successful cooperation with the missionaries the town developed steadily.

Although the German colonial administration negotiated protection treaties with the Herero at the beginning of the colonisation in 1885 the fighting continued. With the additional outbreak of the rinderpest in 1897 the town impoverished even more.

From a tourism point of view, Gobabis is mainly a stop-over for people travelling to Botswana. The border post Buitepost is a mere 110 km away.

A visit to Harnas Wildlife Foundation, about 85 km out of Gobabis, where big cats like cheetah, leopard and lion have found refuge is well worth it.