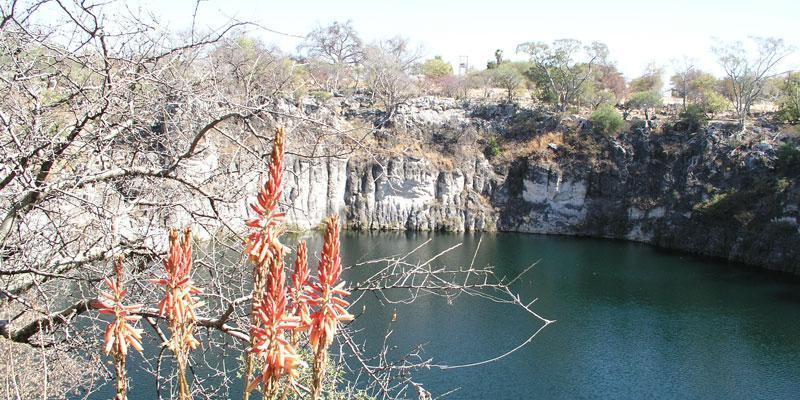 A lake full of arms and ammunition

When travelling on the B1 from Tsumeb towards the Etosha national Park a highlight not to be missed can be found just a few kilometres outside Tsumeb on the left hand side of the road: Lake Otjikoto.

Translated Otjikoto means deep hole, which is very appropriate as the depth of the lake has been measured at 145 metres. As the lake has the form of an upside-down mush-room, the visible surface is so to speak the end of the stem and the “hat” with the greater volume lies way beyond the surface.

The San called this place Gaisis, which means „ugly“ and expresses that the lake was scary and awkward to them. Many legends surround the lake; that it has an infinite depth; that it is connected to the 18 km further Lake Guinas (which is not true) and that the dark waters of the lake will never release anyone daring to enter.

Geologically speaking the lake used to be a karst cave of which the ceiling collapsed thus releasing the lake to the daylight. The first Europeans to discover the lake in 1851 were the explorers Anderson and Galton. According to the records both men took a swim in the then 20 meter higher waters of the lake, much to the horror of their local companions.

The lake still bears a large quantity of arms and ammunition, left by the German troops before capitulating to the South African superiority in 1915. As the lake is open to diving clubs some of the weapons have been recovered and after careful restoration can be seen at the Tsumeb Museum.

The Windhoek Diving Club has also established a so called underwater museum in which some of the weapons have been arranged on a ledge. The lake is accessible to qualified divers, but should always be handled with care as live ammunition lies on the bottom of the lake.

After paying an entrance fee visitors find themselves amidst a neat, green landscape on the way to the lake. A “mini zoo” can be visited, where ostriches, warthogs and a crocodile can be viewed from close by.

Noteworthy is a still partly walled steam boiler, which was formerly used in combination with a steam engine to pump water from the lake to the ore mines close to Tsumeb.

Lake Otjikoto - A lake full of arms and ammunition

Corocodile in the close by mini zoo

Points of interest in the Otavi region

Stay in the Otavi region