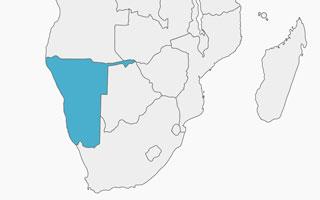 Namibia on the African Map

Namibia is located in the south-western part of Africa and has an area of 824292 km².

Namibia shares its borders with Angola in the north (1376 km), Zambia in the northeast (233 km), Botswana in the east (1360 km), South Africa in the southeast and south (855 km) and the Atlantic Coast in the west (1572 km). Remarkable is the border rectangle or quadripoint (where four countries meet) which is unique worldwide. It actually consists of two border triangles, located in close proximity of each other. One is the border triangle of Botswana – Namibia-Zambia and the other one – only 100 meters away – is Zambia-Botswana-Zimbabwe. However, the course of the border is disputed so one speaks of a virtual quadripoint.

Natural borders in Namibia are formed by the rivers Kunene and Kavango in the north and the Zambezi, Kwando, Linyanti and Chobe in the northeast, as well as the Orange River in the south. These are all perennial rivers whereas the rivers inland only carry water occasionally during the rainy season. 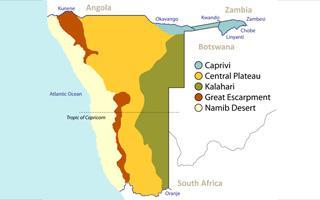 The Namib Desert, from which the country has derived its name, borders the Atlantic coast and covers a length of 2000 km from north-western South Africa all the way to Angola. In Namibia the Namib reaches up to 150 km inland, but has an average width of 100 km. The Namib is divided into the Sperrgebiet National Park, the Namib Naukluft Park, the Dorob National Park and the Skeleton Coast National Park. 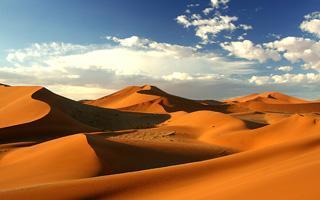 The northern part of the Namib mainly consists of gravel plains whereas the central part is known for its mighty sand dunes, which belong to the highest worldwide. The Namib covers an area of approximately 95.000 km² and is known to be the oldest desert in the world. The temperatures reach from 50°C during the day to below zero at night. Regardless of these inhospitable conditions numerous animal and plant species have adapted over millions of years and are able to survive in the desert.

The Great Escarpment separates the western coastal areas, i.e. the Namib from the central plateau. It was formed about 80 million years ago when the rim of southern Africa was lifted after the breaking up of the super-continent Gondwana. Simplified the escarpment can be described as an up to 1000 meter high mountain range. It stretches all the way from the north to the south of Namibia, but is not a continuous range. Large gaps have been eroded away over millions of years. Many mountain ranges form part of the Great Escarpment lake the Hartmann, Baynes and Joubert Mountains in the north or the Khomas Highland, the Gamsberg and the Naukluft in central Namibia and the Tsaris and Tiras Mountains in the south just to name a few.

The Brandberg Mountain range with Namibia’s highest peak, the Königstein at 2579 metres, the Erongo Mountains and the Spitzkoppe do not form part of the Great Escarpment as they belong to the so-called Damara Formation and are of volcanic origin. 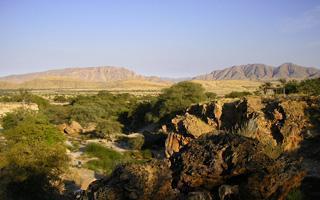 A part of the Central Plateau in the Kaokoveld 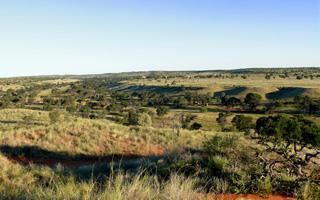 The Kalahari “Desert” forms part of the huge Kalahari Basin, which stretches over seven countries: Namibia, Angola, Botswana, Zambia, Zimbabwe, South Africa and even the Democratic Republic of Congo. Altogether the Kalahari Basin covers an area of more than 1.2 million km².

The Kavango-Caprivi area with its sub-tropical temperatures forms a separate natural region in the otherwise arid Namibia. The area is located in the northeast of Namibia and forms a strip that protrudes far into the middle of the African continent. Due to the humid climate wildlife is abundant and many parts of the Kavango-Caprivi region have been declared national parks or other protection areas.