Climate of the Etosha region

Like the rest of Namibia the climate of this region is characterised by the annual transition of rainy and dry season. Between April and September it hardly ever rains and the animals are forced to move to natural and artificial water holes. During this time they form large herds that are restricted to specific spots throughout the park. During the rainy season the game spreads into the more remote areas of the park.

Flora and fauna of the Etosha region

The Etosha National Park and the rest of the region are divided into 8 different main vegetation zones.  The centre of the park is dominated by the “vegetation zone” salt pan with hardly any vegetation at all. Furthermore there are grasslands, dwarf shrub savannas, thorn bush savannas, mopane savannas and woodlands, mixed woodlands, Terminalia woodlands and some dolomite hills.

Some of the most important game species are elephant, rhino, giraffe, lion, leopard, cheetah, mountain and plains zebra, springbok, black faced impala, eland, warthog and many other mammals. A large number of bird and reptile species can be found as well.

Highlights in the Etosha region

The Etosha National Park is a nature conservation area in northern Namibia and is one of the most significant game reserves in Africa. In Namibia it is by far the best known and most important national park. Today the Park covers an area of nearly 22.912 km² and is completely fenced for the protection of the animals.

Accommodation in the Etosha region

Guestfarm and Camping west of Outjo

Bambatsi is one of the oldest guest farms in Namibia and is is situated 2 hours away from the Etosha National Park. The guest farm offers 8 bungalows and 2 camp sites. Guests can do day trips to the Fingerklippe, Twyfelfontein or to the Petrified Forest. 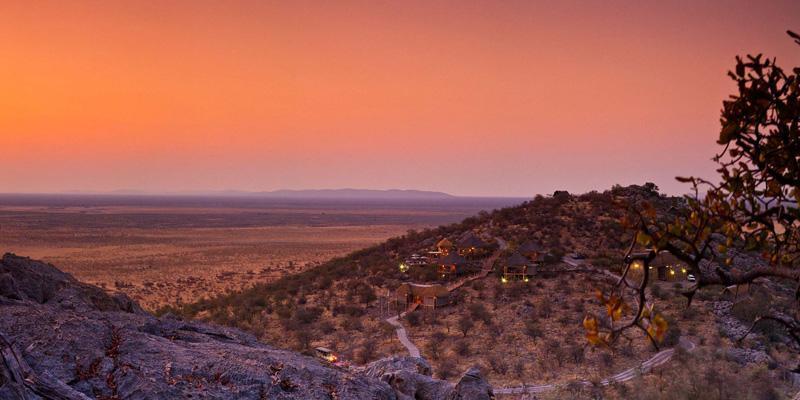 Lodge in the Etosha National Park

Dolomite Camp is located in the western part of the Etosha Nationalp Park; previously restricted and one of the most scenic areas of the park. With 15 waterholes in an area where endangered species like black rhino and black-faced impala have been successfully bred, game viewing is spectacular. 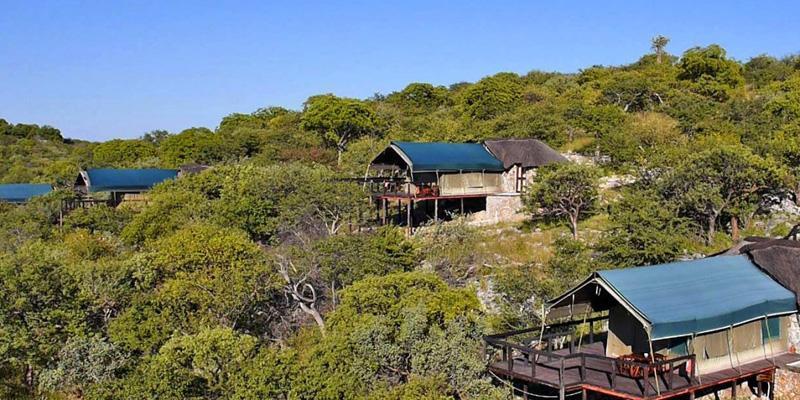 Eagle Tented Lodge & Spa is situated about 55 km from the Etosha National Park. Each of the tents has a wooden balcony with stunning views of the surrounding area. The lodge offers a state of the art spa and the game reserve is home to 21 antelope species as well as rare species such as black rhinos and sable antelope.

Emanya is located 20 km from the eastern entrance to Etosha. The Lodge offers 20 rooms with air-con, a spacious main area with lounge and dining area, a swimming pool with pool-bar and a foot spa surrounded by water features.

Epacha Game Lodge & Spa is situated about 55 km from the Etosha National Park and has 18 individually decorated chalets. The lodge offers a state of the art spa and the Epacha Game Reserve is home to 21 antelope species as well as rare animals such as black rhinos and sable antelope.

Lodge and camping south of Etosha

Etosha Safari Camp is situated 9 km south of Andersson Gate, entrance to the Etosha National Park. It has 50 chalets, 8 fully-equipped self-catering tents, a swimming pool, the Okambashu Restaurant and the Oshebeena Bar, styled like a typical little township bar.

Etotongwe Lodge is situated along the C38 en route to the famous Etosha National Park. The lodge is owner run and thus offers a very personal service. It has a wildlife camp, a restaurant, a swimming pool and an African art shop.

Guestfarm and Camping south of Etosha

Gelukspoort Guestfarm is situated in the Fransfontein mountains between Outjo and Khorixas and offers 6 luxury bungalows and 3 camp sites. At Gelukspoort guestfarm visitors will experience a wild country side and the atmosphere of a real Namibian guest farm.

Lodge and camping in the Etosha National Park

Halali Restcamp is situated in Namibia's famous Etosha National Park. Main highlight of the restcamp is the flood-lit waterhole, which can be visited at any time of the day. Apart of the 61 rooms and several campsites the restcamp also has a restaurant, a bar, a kiosk, a shop for basic food supplies and a little souvenir shop. 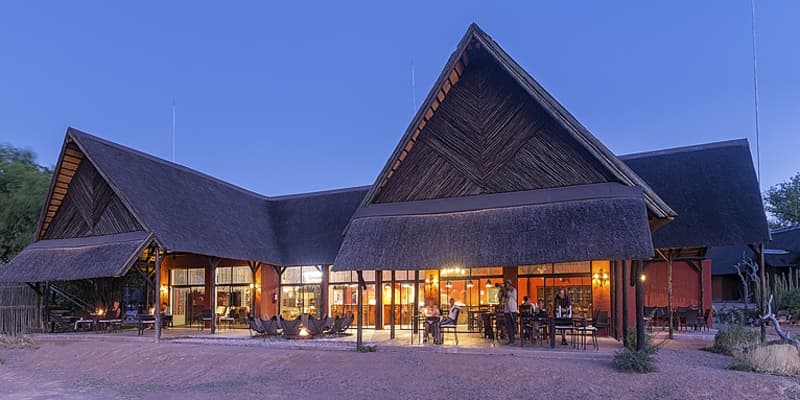 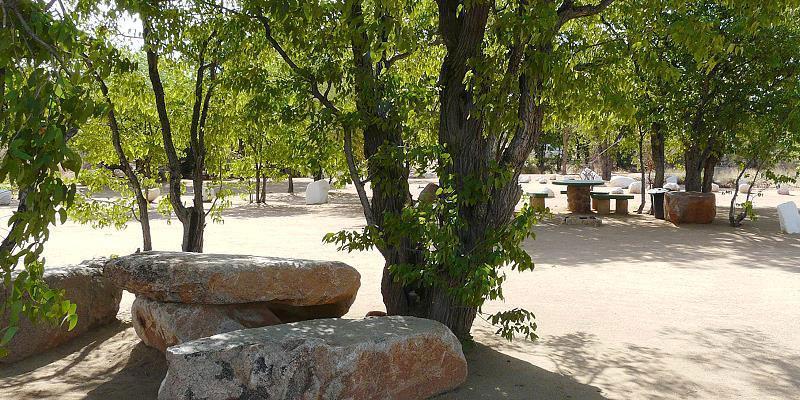 Due to the Corona Pandemic Kamanjab Restcamp has closed down and can't accommodate any guests anymore. 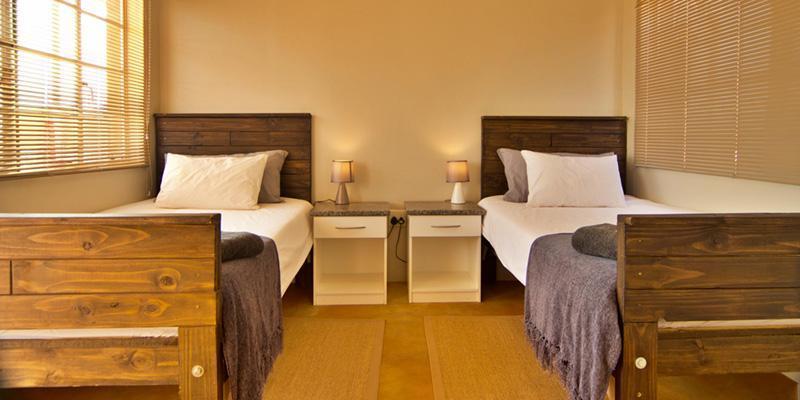 Kifaru Luxury Lodge is situated 5 kilometres away vrom the Luxury Lodge north-east of Outjo and is a perfect stop-over for guests traveling to or from the famous Etosha National Park. The Camp offers 12 en-suite double rooms and lies amidst the tranquil Namibian bush savanna. One of the main activities offered is rhino tracking by foot, an unforgettable experience.

Kifaru Luxury Lodge is situated north-east of Outjo and is a perfect stop-over for guests traveling to or from the famous Etosha National Park. With only four premier and two luxury chalets the lodge offers a very personal experience. One of the main activities offered is rhino tracking by foot, an unforgettable experience.

Little Ongava is the most intimate and exclusive Lodge in the Ongava Reserve south of Etosha. The tented camp offers only 3 private units of which each features its own plunge pool, a sala, indoor and outdoor showers and a bath.  Activities include day and night wildlife-viewing drives and walks with experienced guides.

Lodge at the east entrance of Etosha National Park

Villa Mushara, the most exclusive accommodation of the luxury Mushara Collection, consists of only two separate villas and creates an ideal retreat from the stress of modern day. Each villa has its own unique ambience and consists of 140 square meter living space designed with a classic appeal.

Lodge and camping in  the Etosha National Park

Namutoni is situated in the eastern side of the Etosha National Park. The accommodation facilities are build close to the historic Namutoni Fort, which today hosts a restaurant, a bar, a crafts and curio shop as well as a view point onto the King Nehale waterhole. 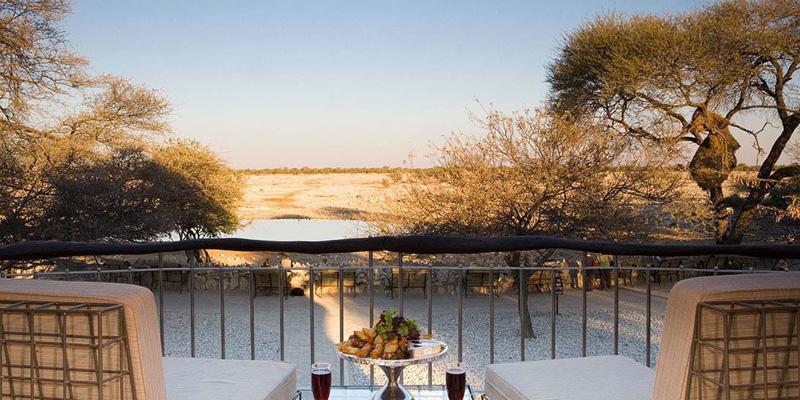 Lodge in the Etosha National Park

Okaukuejo Restcamp is situated close to the Andersson Gate, the main entrance gate to the Etosha National Park. The restcamp offers 102 rooms and several camp sites. It''s main attraction is definitly the flood-lit waterhole, which can be visited at any time of the day. The restcamp also has a restaurant, a bar, a kiosk, a shop for basic food supplies and a little souvenier shop.

Situated south of the Etosha National Park, Okutala Lodge offers accommodation in 21 en-suite luxury double rooms, a refreshing pool and a restaurant with a bar. A Lapa deck offers a spectacular view on the large waterhole of the lodge. The lodge is a home to several animal care projects and offers leopard, cheetah, hyena and rhino feeding. 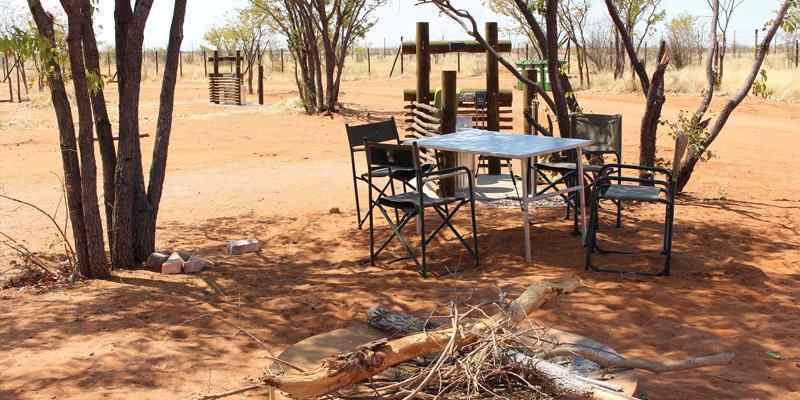 Camping in the Etosha National Park

Olifantsrus Campsite is located between Okaukuejo and Dolomite Camp in the western part of the Etosha National Park. There are 10 campsites available, all with power points. The camp opens its gates at sunrise and closes at sunset.

Situated along the southern boundary of the Etosha National Park, Ongava Lodge offers 14 chalets, each with en-suite facilities. Activities include game drives in open 4x4 vehicles, hides and walks with armed guides on the private reserve (rhino tracking). 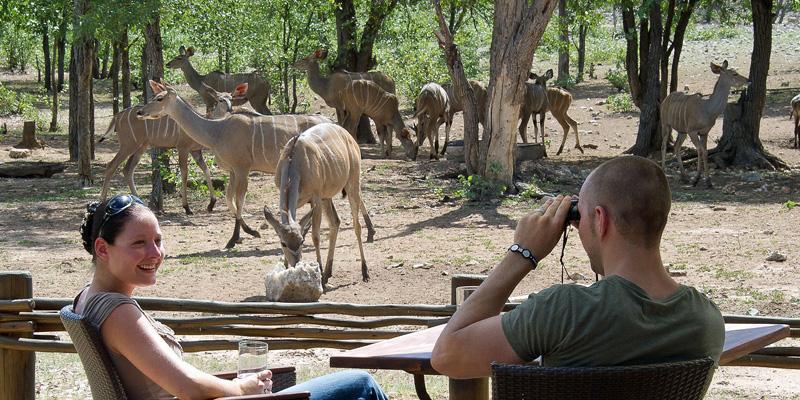 Located in the Ongava Game Reserve Ongava Tented Lodge accommodates 16 guests in eight Meru-style tents. The camp offers a relaxing bar and swimming pool and a well frequented waterhole. Guests can book game drives and daytrips into the Okaukuejo area or the Etosha National Park.

Lodge and camping east of the Etosha National Park

Especially suitable for families the Onguma Bush Camp has a swimming pool, a thached restaurant and a children's activity area. The main attraction is the nearby Etosha National Park.

Lodge east of the Etosha NP

The Etosha Aoba Lodge consists of four Bungalows, three Bush Suites ,three new Explorer Bungalows and a private Honeymoon Bungalow. All bungalows are air-conditioned and have a private terrace, a mini safe and mini bar and tea / coffee facilities. 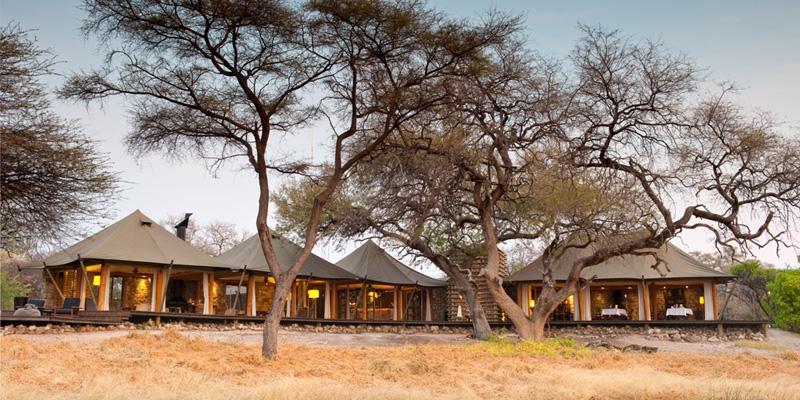 The seven luxury tents of the Onguma Tented Camp as well as the main guest area overlook a waterhole. Due to it's proximity to the Etosha National Park it is ideal for conducting game drives, either as guided activity or as self drives. 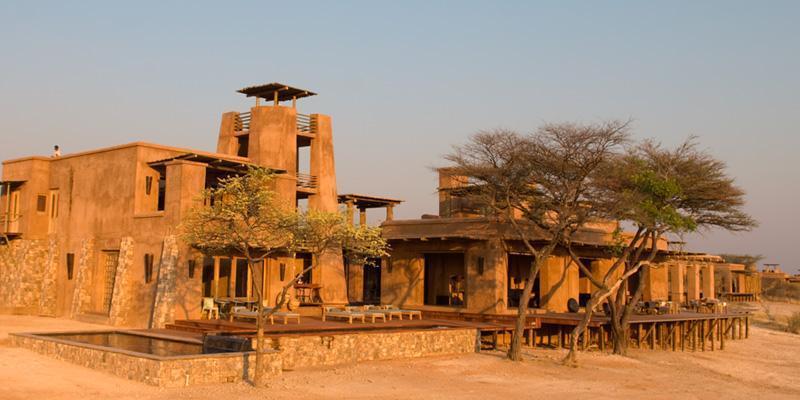 Onguma's intimate Tree Top Camp is unfenced and each of the 4 tree house has a view of the well visited waterhole. It is ideal for guests wanting to visit the close-by Etosha National Park. 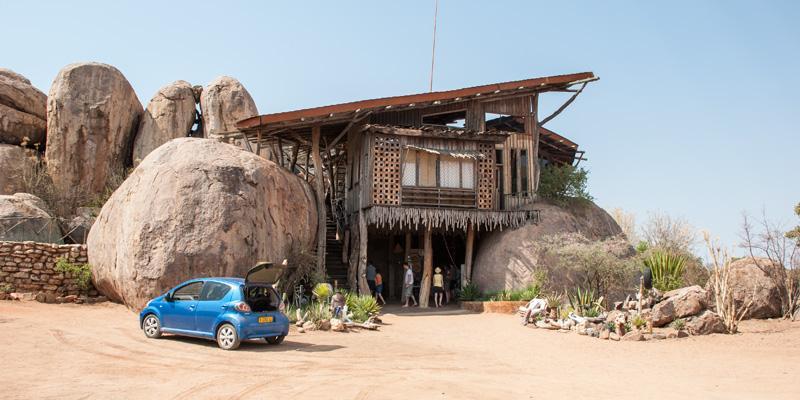 Onjowewe Lodge consists of "The House in the Rocks" and the Bush Camp. The house consists of 3 spacious bed rooms on two levels, 2 en-suite bathrooms, a big living area and a fully equipped kitchen.

Lodge in  the Etosha National Park

Onkoshi Camp is an exclusive retreat built on the edge of the Etosha Pan.The 15 chalets have thatched roofs, canvas walls and are build on elevated decks allowing amazing views onto the pan and its surrounds. Guests are transferred from Namutoni to Onkoshi in NWR vehicles. 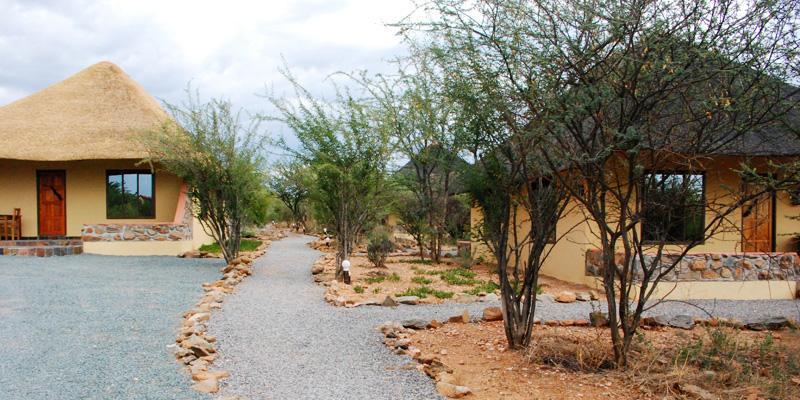 Oppi Koppi is a personal restcamp in Kamanjab in north-western Namibia. Oppi Koppi offers 15 rooms / Bungalows and some campsites, a famous bar and several activities including porcupine viewing, game drives and a visit to a local Ovahimba village. 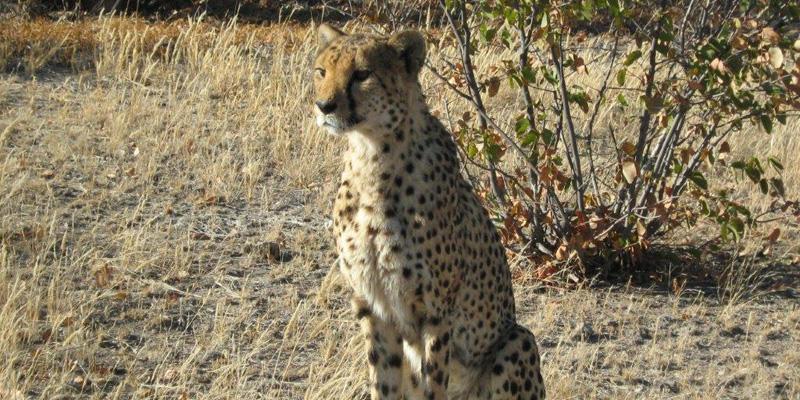 Otjitotongwe Cheetah Guestfarm is a personal guestfarm that focuses on interaction with tame and wild cheetahs. 5 bungalows and several activities are offered. Guests will enjoy game drives, bird watching, hiking trails and of course cheetah programs like feeding tours, etc. 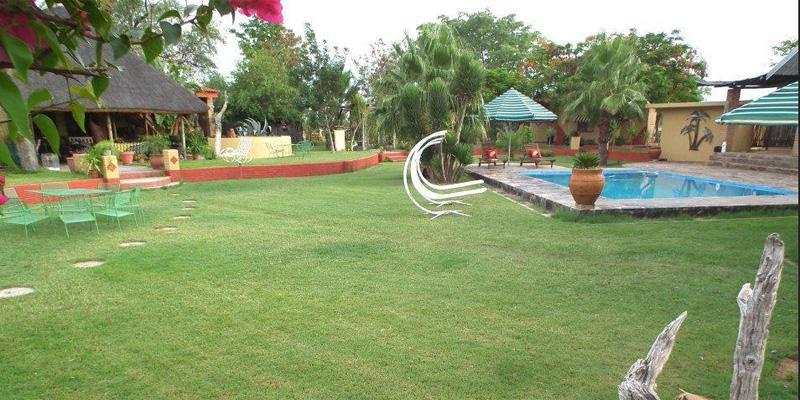 Guestfarm and Camping east of the Etosha National Park

Sachsenhein Guestfarm is situated on the eastern side of the famous Etosha National Park only 25 km from the von Lindequist entrance gate. The guestfarm is definitely one of the more affordable accommodations this close to the park and it offers homely hospitality, a restaurant and bar and a refreshing swimming pool.

Sasa Safari Camp is situated in the Ugab Valley just outside Outjo not far away from the Pareisis mountains and the famous Etosha National Park. The camp has 10 chalets with en suite bathroom, a shady campsite, a swimming pool and friendly service. 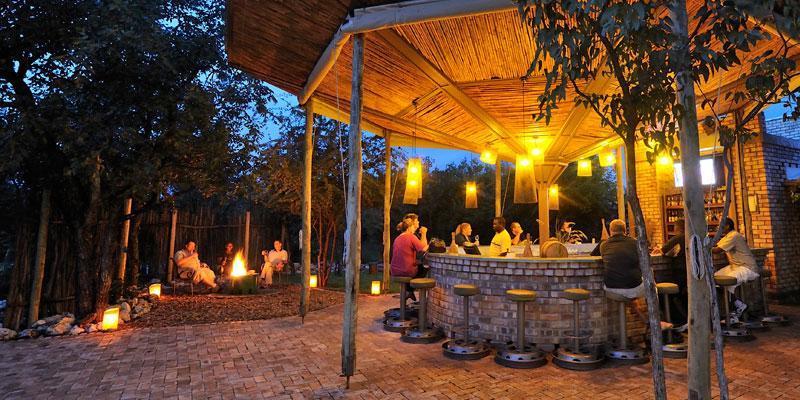 Lodge and camping close to Etosha

The Etosha Village of the Namibian Lodge group Taleni offers plenty of space even for larger groups. The 40 Canvas tents of  the Etosha Village have air condition, unique semi-open en-suite bathrooms and cozy patios to enjoy the surrounding. In some distance to the tents campers find a large campsite with all facilities.

Fireplace and pool with a view © Sasa Safari Camp 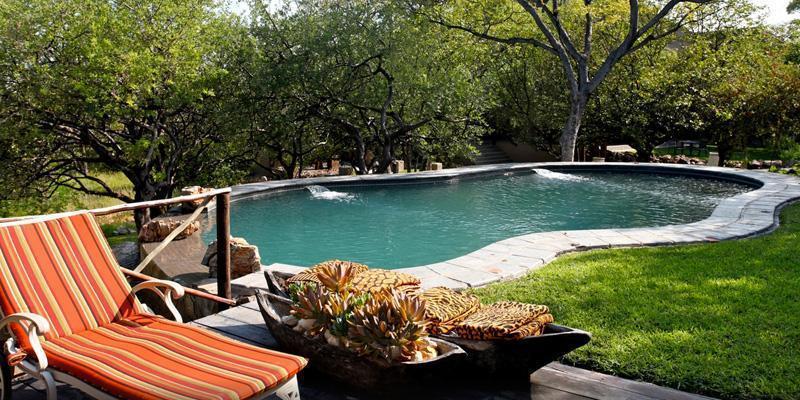 Lodge and camping south of Etosha

Toshari Lodge, situated south of the Anderson Gate offers 38 rooms and 3 campsites, a restaurant with bar, a swimming pool and an own flood-lit waterhole. The Lodge offers several activities including game drives to Etosha.

Vreugde Guest Farm is a typical and popular guest farm in Namibia. The small family business offers comfortable and rustic accommodation in 7 rooms. Activties on offer include guided tours into the Etosha National Park, farm-tours of the working cattle and sheep farm, and walking trails.