The Kaokoveld in Namibia

Parts of the scenic Kaokoveld are very secluded, pervaded by mountain ranges and dry river beds. It is home to the Ovahimba, the last true nomads of Namibia, who on search for water and good pastures trek through the area.

Visitors should not travel the Kaokoveld without a 4x4 and even a visit to Epupa should be done in a four wheeler.

Climate of the Kaokoveld

The summers in the Kaokoveld can be very hot. Temperatures of up to 40°C can be reached. The average annual rainfall varies greatly from west (nearly no precipitation) to east (up to 400 mm).

Flora and Fauna of the Kaokoveld

Plants and animals have adapted perfectly to the climatic conditions of the Kaokoveld. Highlights are the desert-dwelling elephants and lions, found especially along the dry river beds. Baobab trees are also quit common.

At the Kunene a diverse flora and fauna is found thanks to the abundance of water. Swimming is not recommended as the Kunene is home to big numbers of crocodiles.

Highlights in the Kaokoveld

Here we provide an overview of activities, highlights and sights of the Kaokoveld region. One of the highlights is the harsh and remote landscape of the region. Besides that a visit of the Epupa Falls, the Ovahimba Living Museum and other traditional villages, the visit of the Skeleton Coast and the search for desert elephants and desert lions are worthwile.

Accommodation in the Kaokoveld 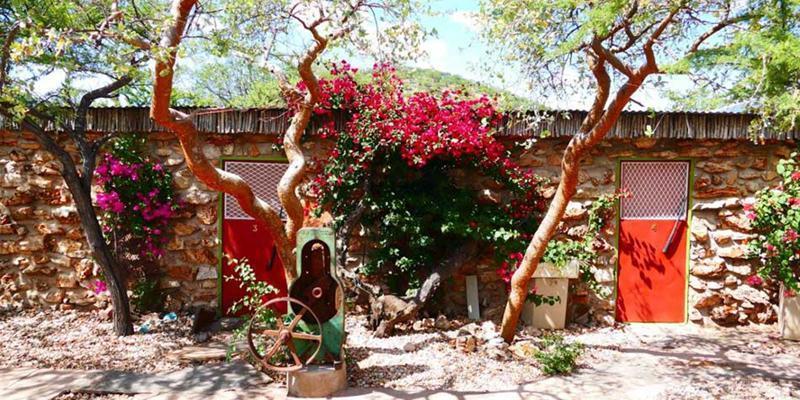 Restcamp and camping south of Opuwo

Camp Aussicht is a unique restcamp in the Kaokoveld situated south of Opuwo. The camp offers four guest rooms and five campsites. Owner Marius Steiner keeps very personal contact to the guests and offers walks into the old Dioptase mine. To reach the camp, which is a bit off the beaten track, a 4x4 car is recommendable.

Camp at the Kunene © Camp Syncro

Self-Catering and campsite at the Kunene, Marienfluss

Camp Syncro is situated in the remote, breath-taking Kaokoveld at the Kunene River. The Camp is only reachable by 4x4. It is a place to relax, to listen to the river, to look at the mountains and to enjoy the scenery. The area is home to the nomadic Ovahimba and to pristine nature and wildlife.

Restcamp / Camping at the Epupa Falls

Epupa Camp is situated at the banks of the Kunene River under shady palm trees and in walking distance from the well-known Epupa Falls. This area is home to the nomadic Ovahimba, who still have a very traditional life-style for which they are known worldwide. Apart from visits to the Ovahimba and the Falls, the lodge offers several activities on the River. 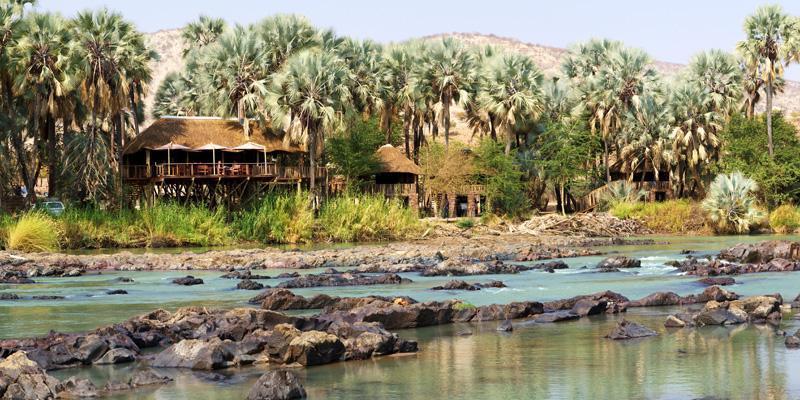 At the banks of the Kunene © Epupa Lodge

Lodge and camping directly at the Epupa Falls

As the name suggests, Epupa Falls Lodge is situated on the banks of the Kunene River close to the well-known Epupa Falls. The lodge houses 5 bungalows all with breathtaking view of the river. The owners of the lodge have been around for many years and have in depth knowledge of the area and the local Ovahimba, which all guests can profit from. 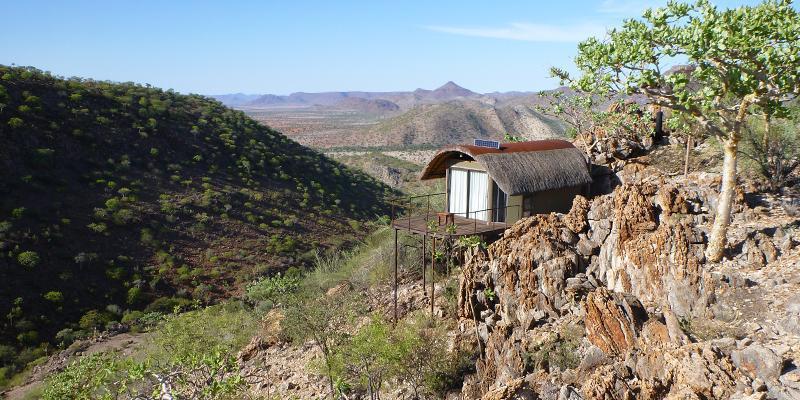 Chalet in the mountains © Info-Namibia

Self-Catering lodge in the Kaokoveld

Etambura Camp, Namibia's first Himba-owned camp is situated on top of a hill near the holy plains of Onjuva, and is a real insider tip. Etambura has five canvas and thatch units each with its own private deck. These units have all been built on wooden platforms allowing amazing views onto the surrounding landscape.

Restaurant and swimming pool inside the Fort © Info-Namibia

Sesfontein Lodge is situated inside a Fort which has been reestablished authentically from the ruines of a historical German Fort built in 1896. The lodge offers 16 double bedrooms and family units, all including bathroom and WC. Several tours can be organized including safaris to the Hoanib, Himba village excursions and rock engraving tours.

Camp in the Hoanib river

Luxury lodge in the Hoanib river

Hoanib Valley Camp is an exclusive and luxury tented camp in north-western Namibia offering six elegant tents. As a joint  joint venture between the local communities and the Giraffe Conservation Foundation the camp is situated in the Hoanib river, one of Namibia’s most remote and wild environments. 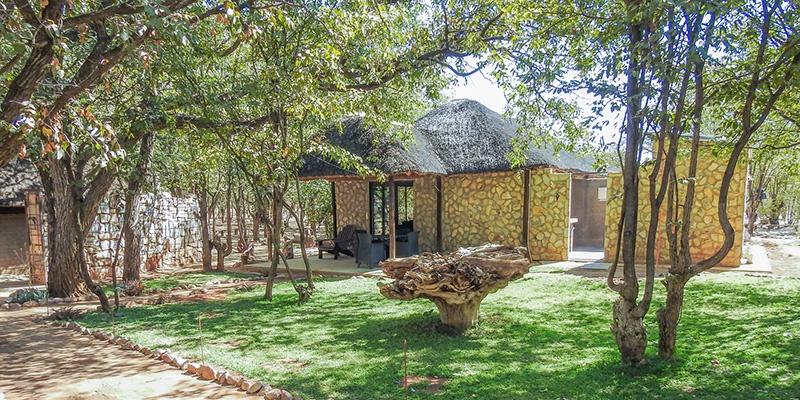 Lodge and camping close to Opuwo

Kaoko Mopane Lodge is located just outside Opuwo, the capital of the Ovahimba. The lodge offers 5 luxury rooms, 6 campsites, a swimming pool and a restaurant with bar. Each room has a private terrace overlooking a riverbed. Kaoko Mopane Lodge is an ideal stop-over for guests traveling to Epupa Falls or deeper into Kaokoveld.

Lodge at the Epupa Falls

Kapika Waterfall Camp is located close to the Epupa Falls in the north of Namibia. The camp offers 10 spacious chalets with en-suite showers, toilet, electricity and mosquito nets. Activities include scenic drives and sundowner drives, nature walks, Himba village tours, bird watching with about 240 species and rafting along the Kunene River.

Lodge between Palmwag and Sesfontein

Lodge and camping between Ruacana and Epupa

Pool and view into the Purros area © Okahirongo Elephant Lodge

Okahirongo Elephant Lodge is located in the Purros Conservancy, 55km from the skeleton coast of Namibia. Often described as one of the last true wilderness areas, the Kaokoveld is home to the nomadic Himba tribe as well as uniquely desert adapted elephant, lion, black rhino and giraffe.

Luxury lodge in the northern Kaokoveld

Okahirongo River Camp is an eco-friendly lodge built on the ridge of the Kunene River granting breathtaking views. Tucked far into the north-western reaches of Namibia, the Marienfluss region is a remote wilderness area where the rough roads and lack of facilities keep travellers at bay. 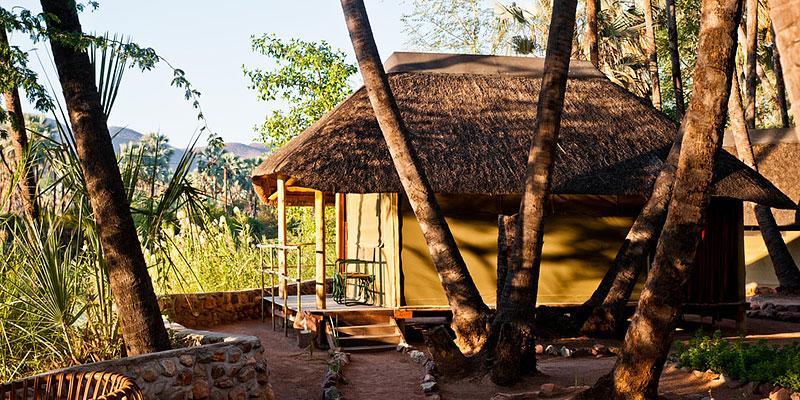 Lodge and camping at the Epupa Falls

Omarunga Lodge is a lodge and campsites situated close to the Epupa Falls on the northern border of Namibia. The lodge offers 14 en-suite chalets equipped with beds, linen, mosquito nets, chairs and luggage tables. Campers find 10 spacious campsites and a thatched ablution facility. Omarunga also offers a large thatched restaurant and a bar, both situated on the banks of the Kunene.

Lodge and camping in Opuwo

Opuwo Country Lodge is located in Opuwo, the capital of the Ovahimba. The hotel offers 22 luxury rooms, 18 standard rooms, 12 camp sites, a swimming pool, a restaurant with bar and a curio shop. Guests will enjoy a 3 hour guided excursion to a traditional Ovahimba village to experience their culture and traditions. 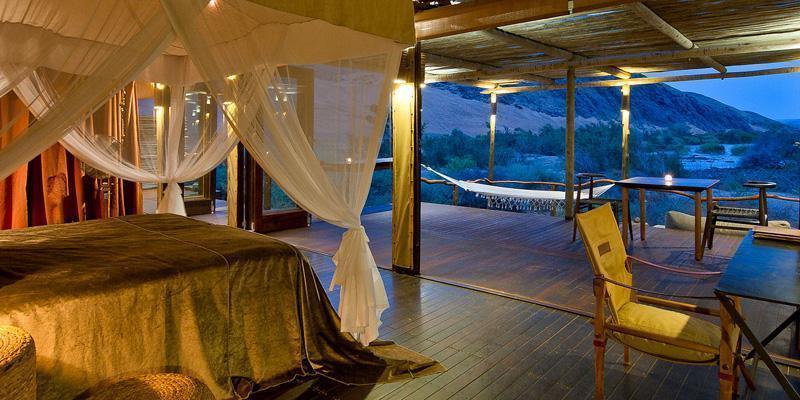 Luxury camp in the Hartmann valley

Serra Cafema is situated in north-western Namibia on the banks of the Kunene River in the Hartmann Valley. The luxury camp offers 8 villas, each with en-suite bathroom, ceiling fan and mosquito net. Activities include nature drives and guided quad bike excursions, boating on the Kunene River and the visit to a Himba settlement.

Exclusive lodge at the Skeleton coast

Shipwreck Lodge is a unique lodge on Namibia’s Skeleton Coast where architectural extravaganza meets the surreal atmosphere of the Atlantic Ocean.  Guests sleep in 10 shipwreck-style bungalows, which are constructed into the dunes around an innovatively-designed lounge and restaurant in the center of the camp.