The region surrounding Swakopmund is very diverse. One can find the characteristic sand desert and gravel plains, as well as savanna and mountainous landscapes of the Great Escarpment. The areas within the Namib Naukluft Park and the Dorob National Park are especially scenic.

Climate of the Swakopmund Surrounds

The climate is strongly influenced by the interplay of the Atlantic Ocean and the Namib Desert. Due to the cold Benguela Current the temperatures drop significantly compared to the temperatures inland. The prevailing south west winds are cooled down by the Benguela Current to such an extent that it prevents the formation of clouds. However a fog bank is formed above the Atlantic floating above the coastline on 200 days a year, sometimes spreading quite far inland.

Flora and Fauna of the Swakopmund Surrounds

Especially in the areas of the Namib Desert a lot of endemic species can be found – perfectly adapted to the hostile environment. The endemic head stander beetle (Onymacris unguicularis) for example uses his body to catch the fog condensation, which he can then drink. The Welwitshia Mirabilis, found numerously in some areas around Swakopmund, can become very old. The plant is also found on the national coat of arms.

Highlights in the Swakopmund Surrounds region

Here we provide an overview of activities, highlights and sights of the Swakopmund Surrounds region. In the Namib Naukluft Park the traveller finds the Sandwich Harbour, a place where ocean and dunes meet in a very special way. In this region there are uncountable specimen of the Welwitschia Mirabilis and there is an exciting desert research station. Furthermore one of the largest seal colonies is also situated in the Swakopmund Surrounds region.

Accommodation in the Swakopmund Surrounds region

Lodge and camping at the Cape Cross seal colony

Hotel at the "Long Beach" between Swakopmund and Walvis Bay

As the name suggests, the lodge is located in a little village called Long Beach between Swakopmund and Walvis Bay. The lodge hosts 17 rooms, an outdoor pool, a terrace and a coffe shop. The dunes of the Namib Desert are a mere 500 metres away, as is the beach of the Atlantic Ocean.

Rössmund Lodge is situated on the northern banks of the Swakop River just 6 km from the coastal town of Swakopmund. The lodge forms part of the 18-hole Rossmund Golf Course, uniquely set in the Namib Desert, and is one of only five registered all-grass desert golf courses in the world.

Hotel at the "Long Beach" between Walvis Bay and Swakopmund

The Burning Shore is situated between Swakopmund and Walvis Bay in a little village called Longbeach embraced by the Atlanic Ocean on the one side and the Namib Desert on the other. The Burning Shore offers 12 luxurious rooms and dinner is served in either the indoor restaurant or the outside deck. 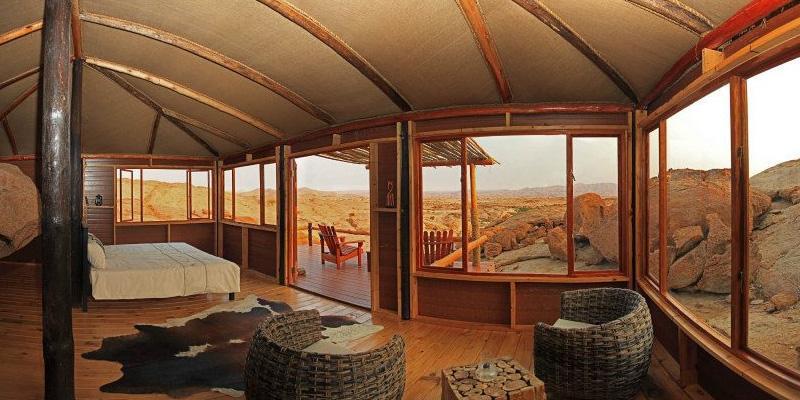 PLEASE NOTE: WÜSTENQUELL HAS BEEN CLOSED AS OF MAY 2019 !

Wüstenquell is a Self-Catering Lodge situated in the desert, more precisely in the gravel Namib east of Swakopmund. The lodge offers one Rondavel, two mountain chalets and the Zebra Outpost, a Self-Catering house for four people.