The Central north of Namibia

The region ‘Central North’ formerly known as the Ovamboland includes the four political regions Oshikoto, Ohangwena, Omusati and Oshana. The population here consist mainly of the people from the Ovambo language group. About half of Namibia’s population lives in the Central North and compared to the rest of the country the population density is relatively high.

The Central North is bordered by the Etosha Pan in the south, by the Kaokoveld in the west, by Angola in the north and by the Kavango Region in the east.

Climate in the Central North

The Central North receives an annual rainfall between 350 – 550 mm. The Ovambo, of whom many still live of subsistence farming, make use of the water in the oshanas. Oshanas are shallow water ways that are filled during the rainy season with draining waters from the Angolan highlands. During the efundja (floods) the water eventually travels into the Etosha Pan were it forms a large temporary lake.

Flora and Fauna of the Central North

The soils of the Central North are mostly nutrient-poor. Only a sparse vegetation is found in the oshanas during dry season. Mopane trees and Makalani palms are growing along their fringes. During the efundja large parts of the Central North turn into wetlands and a rich bird life appears consisting of pelicans, storks, flamingos and many other species.  The waterways are filled with fish. Apart from that only very little wildlife is found in the area north of the Etosha National Park due to the high population density.

Highlights of the Central North

For the normal tourist who is rather interested broad and deserted landscapes and a rich wildlife, the Central North might not be the ideal destination. However, the interesting culture of the Ovambo people, the exciting history of the liberation struggle as well as some sights such as the Ombalantu Baobab, which is one of the largest Baobabs in Africa or the Olukonda Missionary Station including the Nakambale Museum is worth a visit.

Accommodation in the Central North

Ondangwa Hotel is situated in the north of Namibia, the country''s most populated area. As one of the largest hotels in the area it has 90 rooms, conference facilities, a restaurant and bar, as well as a swimming pool. Main attractions of the region are the Oshivambo culture and of course the nearby Etosha National Park. 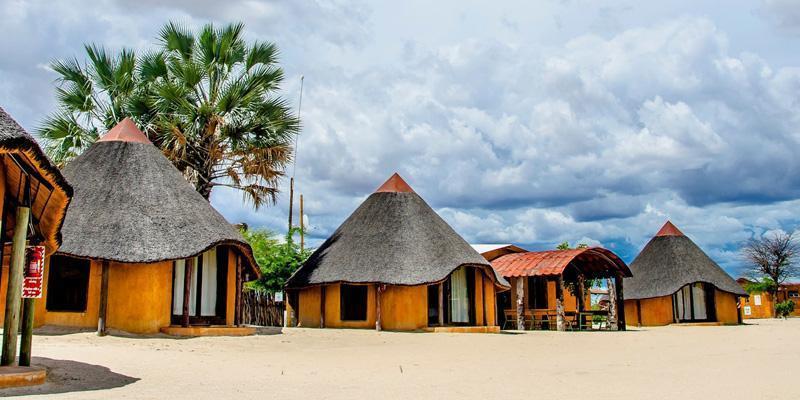 Ongula Homestead Lodge is situated about 20 km east of Ondangwa. The lodge has been built next to a traditional homestead and one of the highlights for the guests staying at Ongula is a visit ot this homstead, where they get a detailed insight into the Owambo culture. The four rondavels have been built in the round African hut style with a modern interior.

Uukwaluudhi Safari Lodge is situated about 100 km north of Etosha between Kamanjab and Ruacana along the C41, 16 kilometres south of Omakange. It is the perfect stop-over for guests traveling from Kamanjab to Opuwo, to Ruacana or into the former Ovamboland.