The vast Fish River Region with its impressive landscapes is situated in the far south of Namibia and stretches from the South African border up to the small town of Aus in the south-west and further to Keetmanshoop in the south-east of Namibia. The region is dominated by the Fish River Canyon, who with its 161 km length, up to 27 km of width and 550m of depth is the second largest canyon worldwide after the Grand Canyon in the USA.

Climate of the Fish River Region

The extreme climate is often reason for the long lasting impressions. During winter nights it can be extremely cold and during summer days extremely hot. In addition the region is one of the most arid regions of the country, characterised by harsh droughts and low air humidity. The average annual rainfall lies between 50 to 150 mm.

Flora and Fauna of the Fish River Region

Predominant are the two vegetation zones, the Succulent and the Nama Karoo that belong to the semi deserts. Furthermore some of the region stretches into the Namib Desert. Many plants can be found in the region which have adapted to the harsh environment. The best known are the picturesque quiver trees, the euphorbias and the aloes.

Many animals have also managed to adapt to the conditions of this hostile environment like giraffe, mountain zebra, oryx, kudu, springbok, ostrich, leopard and the fascinating feral horses of the Namib.

Highlights in the Fish River region

Here we provide an overview of activities, highlights and sights of the Fish River region. In the central area of the region the Fish River Canyon dominates the landscape. Besides that there are Feral horses, mysterious Quiver tree forest and the Gondwana Canyon Park.

Accommodation in the Fish River region

Restcamp in the Fish River Canyon

/Ai - /Ais Hotsprings Spa is situated at the south-eastern end of the famous Fish River Canyon. Meaning "burning hot" in the Nama language. /Ai - /Ais offers 43 rooms and as a main feature the hot Spa, where the temperature of the natural hot springs is cooled down to an enjoyable and relaxing level.

Located at the B4, around 90 km west of Keetmashoop, Alte Kalköfen Lodge is a nice stop over for visitors travelling between Keetmanshoop and Lϋderitz as well as between the Fish River Canyon and Sossusvlei. 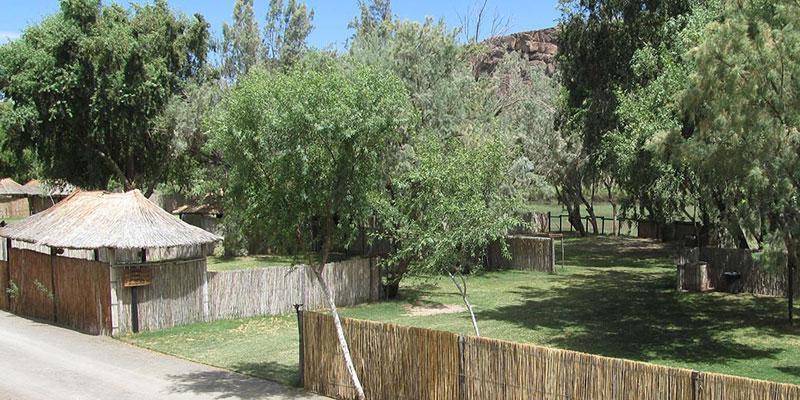 Amanzi River Camp is situated at the mighty Orange River specializing in canoeing. Different trips are being offered on the Orange River - suitable for everyone including kids. Set in fascinating landscapes and halfway between Windhoek and Cape Town these river adventures are perfectly suited for travellers to and from South Africa.

The Bahnhof Hotel is situated in Aus, a small village in southern Namibia surrounded by picturesque scenery. The hotel offers 21 rooms, a restaurant with bar, conference facilities, a lounge with sundeck and beer garden. Besides day trips to Lüderitz or Kolmanskop the historic Schutztruppe graveyard or the old "Prisoner of War" camp can be visited.

Bed and breakfast in Keetmanshoop

Bird's Nest bed & breakfast is situated in Keetmanshoop and offers 10 en-suite bedrooms, each equipped with television and air-conditioning. Bird's Nest has a lounge bar which is open every evening where guests can have a drink or simply relax.

Cañon Lodge is located in the Gondwana Canon Park about 20 km away from the Fish River Canyon. It has 25 stone chalets, a restaurant and a swimming pool. Guests are free to go on walks, additionally several guided excursions are being offered, like drives to the Fish River Canyon, horseback tours and game drives.

Lodge and Camping at the Fish River Canyon

Canon Roadhouse is situated 14 km from the Fish River Canyon. It has 24 rooms, a rather famously decorated restaurant with ‘old wheelers’ bar, a swimming pool, a camp site and a fuel station as well as a Canyon Information Centre. Sundowner drives in the Gondwana Canon Park are being offered. 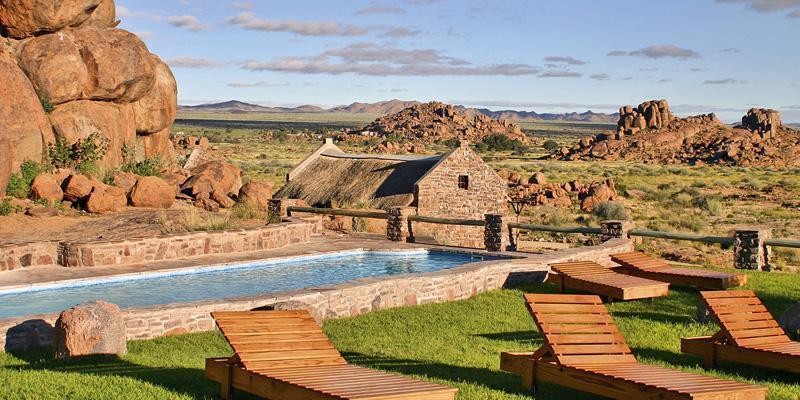 Cañon Village is situated in the Gondwana Cañon Park about 20 km from the Fish River Canyon.  It has 42 cottages built in the Cape Dutch style, a restaurant and bar and a pool.  Guests are free to go on walks, additionally several guided excursions are being offered, like drives to the Fish River Canyon, horseback tours and game drives.

Lodge and camping in Aus

Desert Horse Inn is situated in the Aus Mountains about 2 km west of Aus. It has 24 rooms, a restaurant and a bar as well as a campsite. Several marked hiking trails are being offered, as well as guided scenic drives, desert tours and day trips to Kolmanskop and Lüderitz.

The Fish River Lodge is the only lodge located directly at the Fish River Canyon, providing spectacular views into the canyon. The lodge offers 20 chalets, a pool, a lounge and a restaurant with bar. Several activities such as scenic drives, sundowner drives and canyon hikes can be made. 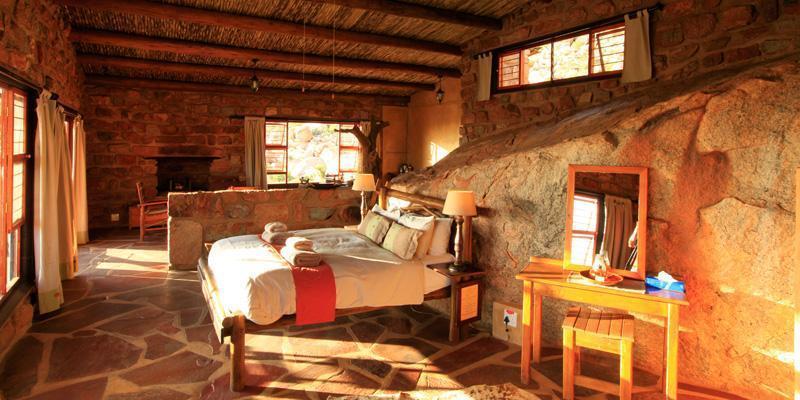 Eagle’s Nest Chalets are located about 15 minutes drive from Desert Horse Inn. It has 8 chalets with kitchenette, fireplace and private veranda with breathtaking views. Meals are served at the desert Horse Inn restaurant. Take away breakfast and barbeque packs available on request. 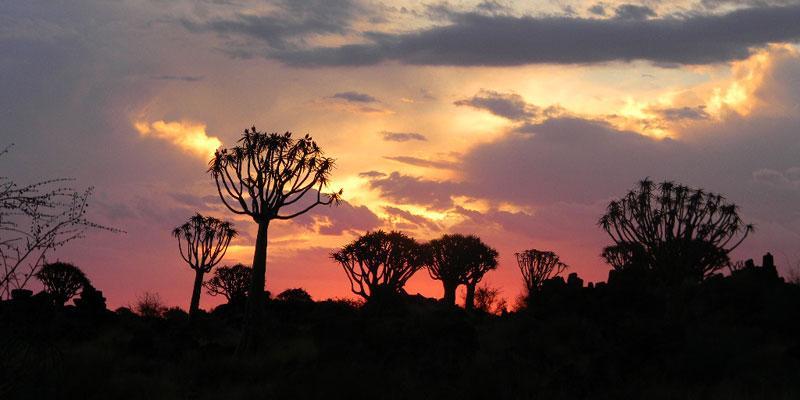 //Garas Park Rest Camp is situated 20 km north of Keetmanshoop in southern Namibia. The owner of the rest camp is also an artist and immediately when turning off the B1 towards the campsite one can find several sculptures made from all sorts of materials along the road. Day visitors are welcome to visit this slightly different Quivertree forest.

Lodge in the Karas mountains

Goibib Mountain Lodge is located between Keetmanshoop and Grünau in the heart of the Great Karas Mountains. The lodge offers its guests tranquillity and a very personal service in pristine nature - off the beaten track. 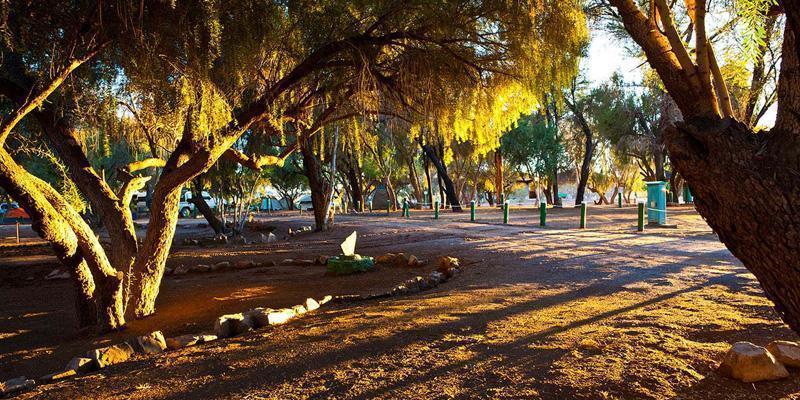 Hobas is the hub to the famous Fish River Canyon, the second largest canyon worldwide. Hobas offers 6 bush chalets and 14 campsites and is the ideal stay over for hikers wanting to accomplish the well-known Fish River Canyon Hike!

The Mesosaurus Fossil Camp is a guest farm and campsite in the south of Namibia. The farm hosts its own Quivertree forest and offers the famous "Mesosaurus Fossil Tour" which is personally guided by Giel or Hendrik Steenkamp. 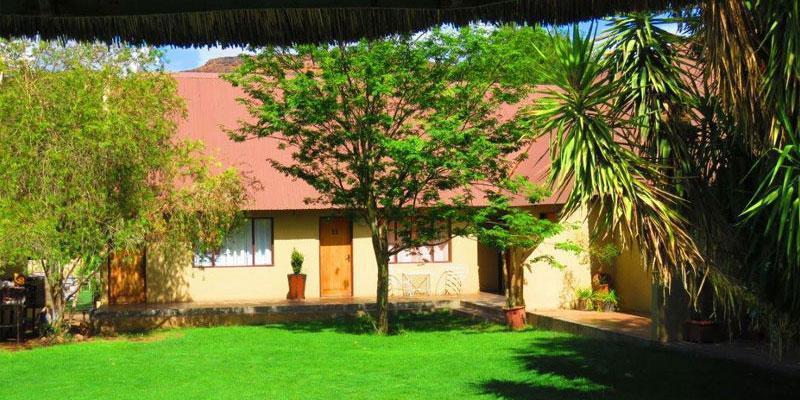 Lodge / Self-Catering at the Orange river

Orange River Lodge is situated on the banks of the Orange River in Noordoewer, a border town of South Africa and Namibia. The lodge offers 4 double self-catering rooms, 2 double rooms and 6 family rooms. Offered activities are fishing and canoeing.

Accommodation at the Orange River

Provenance Camp is situated on the banks of the Orange River only 13 km away from the border to South Africa. The camp offers 17 cabanas, 2 family rooms, 1 honeymoon suite and an a la Carte restaurant. A specialty are trips on the Orange River.

Guesthouse and Self-catering in Keetmanshoop

The Schützenhaus Guesthouse is a guest house in Keetmanshoop on the premises of the oldest German Club in Southern Africa, established in 1907. The Guest House provides 20 rooms, an a la cart restaurant and a  bar.