The „Damaraland“ is part of the Kunene Region in the north-west of Namibia and is located between the Brandberg and the little village of Sesfontein. The Damaraland is characterised by its rocky and rugged landscapes of rough, fascinating beauty.

This region is home to the people of the Damara language group, thus the old name „Damaraland“, which today is only used in tourism and as geographical classification. In this context the name is also used on this website.

Climate of the Damaraland

During the Namibian summer (November-March) the Damaraland experiences very high temperatures of up to 40°C. The anual rainfal is low, some year it is completely absent. Numerous large dry river beds meander, which after heavy rainfall turn into torrential rivers within hours.

Flora and Fauna of the Damaraland

The flora and fauna af the region have adapted perfectly to the harsh weather conditions of high heat and persiting droughts. Here you find the desert-dwelling elephants who with elongated limbs and broader soles are able to handle the extreme rock and sand desert better and can travel for kilometres in the dry river beds in search of water. Also the critically endangered desert lions managed to adapt to the arid climate. Numerous endemic desert plants are found in the Damaraland such as the poisonous but photogenic Euphorbia Virosa and the ancient Welwitshia Mirabilis.

Places of interest in the Damaraland

Here we provide an overview of activities, highlights and sights of the Damaraland, a unique and harsh landscape. The traveller finds Namibia's highest mountain (Brandberg), centuries old rock engravings in Twyfelfontein, a petrified forest, a huge rock finger and a Living Museum, presenting the traditional culture of the Damara.

Accommodation in the Damaraland

The Brandberg Restcamp is located in the small town of Uis close to the Brandberg, Namibias highest mountain, which is famous for the White Lady and other San paintings. The rest camp offers 4 rooms, 10 self-catering chalets, 10 campsites and a 25 meter swimming pool. 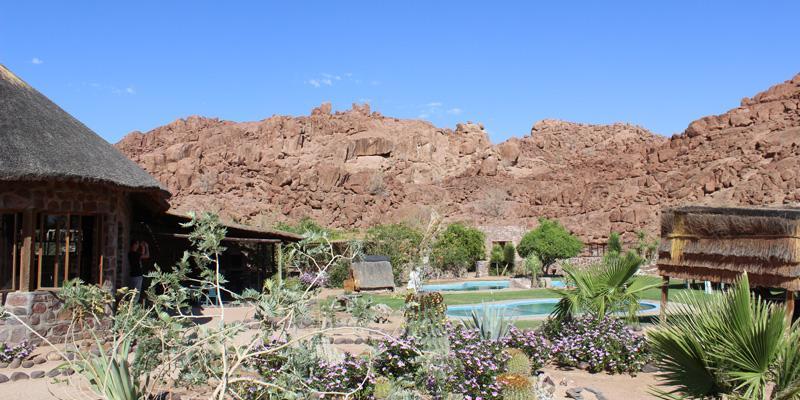 Lodge and Camping at the Brandberg

The Brandberg White Lady Lodge is ideally situated for visitors who want to explore the Brandberg, Namibia's highest mountain. The Lodge offers 15 basic rooms and several campsites located in the Ugab river bed, which is every now and then visited by Desert Elephants.

Tented Camp in the Damaraland

Buruxa Camp is a Tented Camp in the Damaraland, situated in the breathtaking scenery of the granite hills and bush savannah on the banks of the mostly dry Ugab river bed. 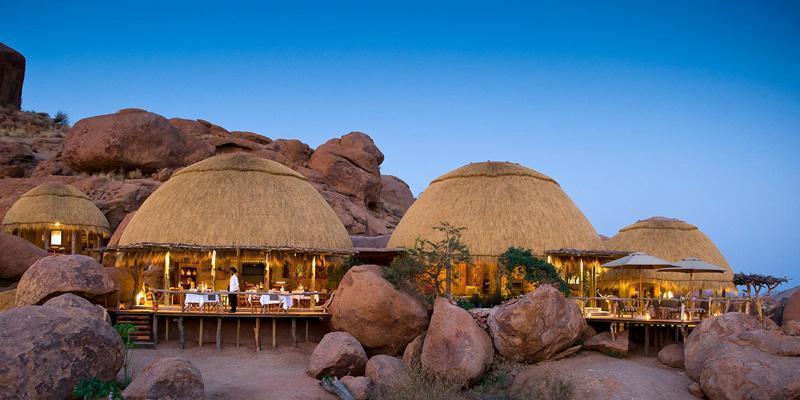 Luxury Lodge in the Damaraland

Camp Kipwe is built creatively into the large granite boulders of the Damaraland. The luxury camp offers 9 bungalows and one suite. Activities at the camp include nature drives in search of the desert-adapted elephants, Twyfelfontein rock engravings excursions and guided walks with Kipwe''s experienced guides. 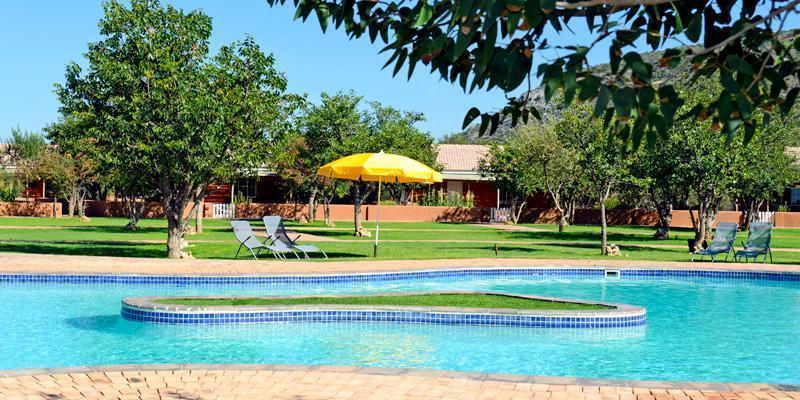 The Damara Mopane Lodge is situated about 20 km east of Khorixas. It has 60 rooms all surrounded by a vegetable and herb garden used by the restaurant. The lodge has a swimming pool and a sundowner view point.

Situated in the Huab River Valley, the Damaraland Camp offers 10 thatched units on individual wooden decks, a swimming pool, a restaurant with bar and an and outdoor 'boma'. Activities revolve around exploring the Huab River in search for desert-adapted elephant and nature walks. 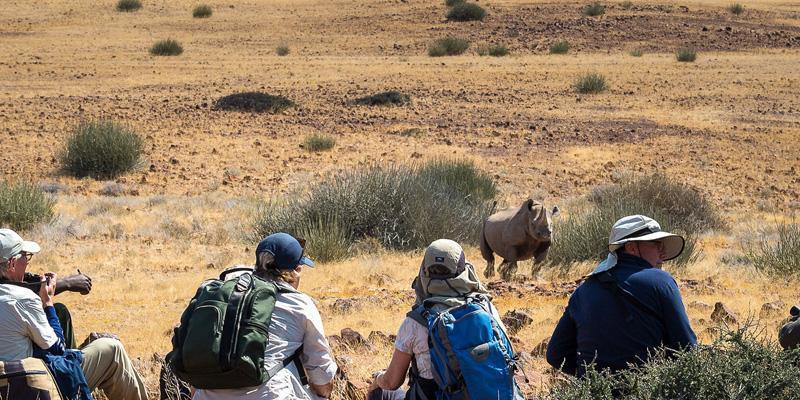 Lodge in the Aba-Huab river

The Doro Nawas Camp is located in the dry Aba-Huab River Valley and offers 16 units. Activities include extensive game drives and hikes with experienced guides, a guided trip to the rock engravings site of Twyfelfontein and the visit of the Damara Living Museum. 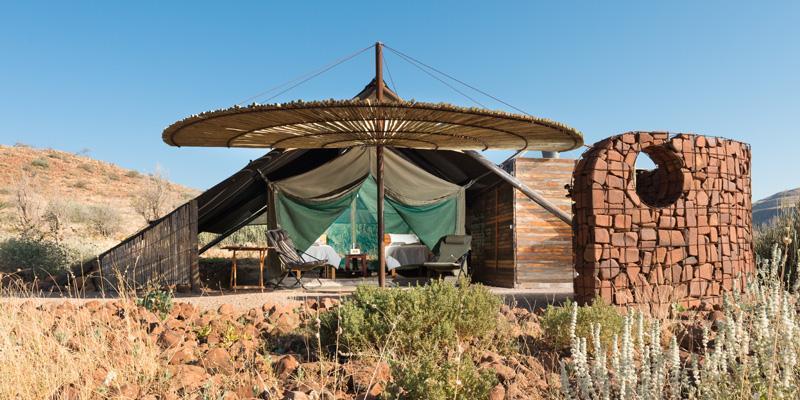 The Etendeka Mountain Camp is situated at the foot of the impressive Grootberg massif in the unique landscape of the Damaraland. The eco-friendly camp offers ten luxury en-suite tents, which are connected by pathways to the main tent, where the restaurant is located.

Lodge in the Northern Damaraland

Grootberg Lodge is a popular lodge situated at the Etendeka Plateau in the northern Damaraland. The Lodge is 100% owned by the Conservancy of the #Khoadi//Hoas community. Grootberg Lodge offers 16 rock chaltes build in the beautiful landscape with stunning views. There are certified masseuses at the Lodge who offer a wide range of massages on request.

Lodge and Bush SPA in the Damaraland

Huab Lodge & Bush SPA is situated in the picturesque Damaraland within a 8000 hectare private nature reserve and offers relaxing luxury in the African bush. Wellness treatments and massages are offered rounded off by a bath in the natural thermal pool. The lodge is known for its eco-friendly, low-impact and sustainable setup.

iGowati Lodge is situated in the little town of Khorixas, gateway to the breathtaking Damaraland. The surrounding area is packed with touristic highlights like the Petrified Forest, the rock engravings of Twyfelfontein and the Damara Living Museum. Apart from that the area is also home to the famous desert-dwelling elephants.

Khorixas Restcamp is located just outside Khorixas and is an ideal stop-over when visiting the many attractions in the area like the Petrified Forest, Twyfelfontein, the Damara Museum or the Vingerklip rock formation - just to mention a few.

Self-Catering and camping in the Damaraland

Madisa Campsite is situated in the beautiful Damaraland. It offers self-catering safari tents and private shaded campsites with running water, wash-up facilitys, private ablutions and braai area. The camp lies within the habitat of the desert-dwelling elephants and is only 50 km away from the famous rock engravings of Twyfelfontein.

Luxury Lodge in the Damaraland

Guestfarm south of the Vingerklip

Omburo-East is located in the Ugab valley between Outjo and Khorixas. The guest farm is situated directly at a dry river with a breathtaking view of numerous Table Mountains and Plateaus. Omburo-East offers comfortable guest rooms with bathrooms in an African cottage style. 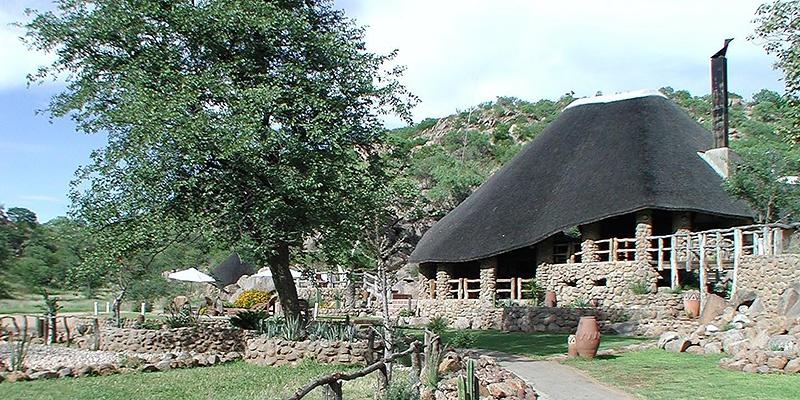 Lodge on the banks of the Huab River

Ondundu Etosha Lodge is located close to the western part of the famous Etosha National Park  on the banks of the Huab River. The lodge offers 4 luxury chalets and 4 luxury tents. Fitted with a little kitchen, the tents are suitable for self-catering purposes. 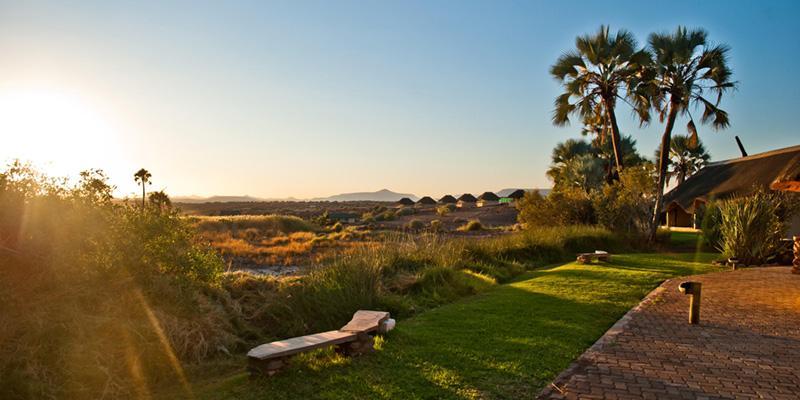 Lodge and camping in the Palmwag Concession

Palmwag Lodge and campsite is located at the Uniab River in north-western Damaraland. The lodge offers 24 rooms, 8 canvas tents (fully equipped for self-catering) and 13 campsites, as well as a petrol station and a restaurant. Palmwag is regularly visited by desert-dwelling elephants.

Camp at the Atlantic Ocean

Terrace Bay Camp is situated in the Skeleton Coast Park directly on the beach and pretty isolated with the Namib Desert at the back and the Atlantic in front. This makes it an ideal retreat for anglers and for those truly wanting to escape the huzzle and bussle of everyday life.

Camping at the Atlantic Ocean

Torra Bay is situated in the Skeleton Coast Park and is a popular spot for passionate anglers. Apart from the 60 camp sites Torra Bay has a shop and a fuel station.

Torry Bay is only open in December and January

Tented Camp in the Damaraland 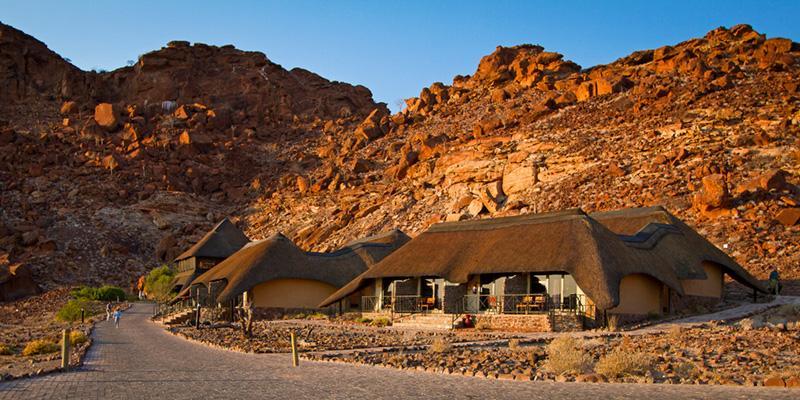 Twyfelfontein Country Lodge is located close to Twyfelfontein rock engravings site. The Lodge offers 65 rooms, a big lounge and lapa and a simming pool. Activities include stargazing, guided hiking trails and drives into the Aba Huab, a large dry river which is sometimes visited by desert elephants.

Lodge at the Ugab terraces

The Ugab Terrace Lodge is situated on a plateau with a panoramic view of the Ugab river. The Lodge offers 16 Bungalows each with its own veranda and 6 campsites with own braai facilities as well as a restaurant & bar, a curio shop, a sundeck and a swimming pool.

The Uis Guesthouse offers modern accommodation with breakfast, lunch and dinner in the small village of Uis, close to the Brandberg Mountain, Namibia's highest mountain. The guesthouse has 12 rooms, including 4 standard, 5 luxury rooms and 3 suites. All rooms are equipped with air conditioning and have access to free WiFi. There is a refreshing swimming pool and a restaurant.

Guesthouse and camping in Uis

Vingerklip Lodge is located close to the popular Vinger klip, a 35 m high pillar of rock. The lodge offers 22 rooms, the exclusive and romantic Heavens Gate Suite on top of a mountain and the Eagles Nest restaurant.